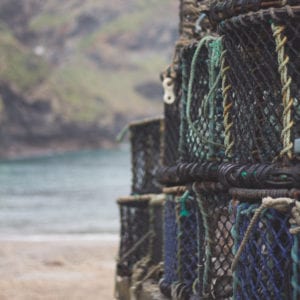 A concerted effort by fisheries managers in B.C. and Washington State are getting a handle on the pike population in the Pend d’Oreille and Columbia Rivers.

A conspicuous lack of northern pike in the Robson Reach region of the Columbia River is a good sign for trout anglers following another round of gill-netting for the invasive northern pike last month.

The Ministry of Forest, Lands, and Natural Resources Operations (MFLNRO) continued with the northern pike suppression program in May and finished up last week with early indications that the pike population is declining in the Columbia River in the area below the Hugh Keenleyside Dam.

“We’re close to 50 this year, the numbers are down but our recapture rate is really high,” said Jeremy Baxter of Mountain Water Research (MWR).

Baxter, who heads the netting program, says 12 of the 50 pike netted had tags indicating the pike had previously been caught and tagged by Thompson Rivers University Masters student Dan Doutaz, who tagged 15 pike earlier this year to track their movements through the Columbia River.

“It means that the population in the Robson Reach area is quite low,” said Baxter.

The pike numbers reflect a significant decline from the 2014 population estimate of over 700 when 133 pike were netted.

“There may have been a winter kill, or they may have moved out of the area because it’s not suitable habitat, but for whatever reason the population is down to probably less than 50 now,” said Baxter. “We’ve removed 300, so I think we’ve been successful at controlling them – the big spawning adults – and as long as that is kind of maintained I think it will be a successful program.”

MWR set eight nets per day from May 16 to 20 and May 30 to June 3 for approximately six to eight hours each day. The team of Baxter and fisheries tech Clint Tarala initially concentrated their efforts in the Robson Reach area where they netted 11 of the tagged pike in the first week.

“We kept on setting in the usual spots, and we were capturing them in and around Celgar in the Robson Reach, but everything dropped off really dramatically last week and we got a couple of zero days where we didn’t capture any pike.”

The MWR team moved nets to the slack water of the Kootenay Oxbow and near Zuckerberg Island where they renewed success.

“I think we set six nets in there and we caught seven pike right away.”

But even more unusual and surprising was that the net also pulled up another alien species, a five-pound tench. The invasive species is native to Europe and Asia and was first introduced to the United States as a sport fish and food in the late 19th century. Tench prefer lakes and slow-moving waterways with abundant vegetation and muddy bottoms. A bottom-feeding fish, it eats shellfish such as snails, and insect larvae and can live in water with low levels of oxygen, and temperatures from 0 to 24 C.

“I don’t know much about them, they’re an alien species and the look kind of like carp, about 55-cm.”

In addition to the tench and pike, the nets also pulled up smallmouth bass and yellow perch, a small representation of close to 30 invasive species that swim in the Columbia.

“They are not as invasive as a northern pike but they could take over if they get successful at spawning. That area is unique for the Columbia River, it’s about six degrees warmer than the main stem so I can see why exotic species are doing well in there.”

Many invasives don’t pose the threat that pike do on the Columbia. The apex predator has shown a preference for soft-bodied salmonids like whitefish, kokanee, and trout and are a threat to the excellent rainbow trout fishery on the Columbia, not to mention the salmon and steelhead fishery further downstream.

That threat from pike, like the 42-inch (105-cm), 25-pound female behemoth that Baxter landed last week, will also grow if they begin to spawn successfully. The massive female was bursting with eggs, making the Trail fish biologist wonder about the suitability of the habitat as the spawing period seems to have been drawn out, with one female re-absorbing her eggs.

“I think if we continue to control them, that’s the best we can do, and as long as we can get the big adults before they spawn each year then that will kind of be the program going forward.”

A study done by Golder Associates in June and July of 2015 surveyed the shallows in the Robson Reach area below Zeltsoff Celgar in an attempt to identify post-spawn larval pike. The study was unsuccessful in identifying pike larvae, which could be due to a variety of factors from high discharge levels to lack of vegetation. However, Baxter did find pike larvae in the stomach of an adult pike netted last year, suggesting that some recruitment (spawning) is taking place.

The lower pike numbers on the Columbia can also be attributed to a successful suppression program from their likely source on the U.S. section of the Pend Oreille River. Since 2011, the Kalispell Tribe of Indians Natural Resource Department (KNRD) netted over 17,000 pike in the 55 mile stretch of the Box Canyon Reservoir, drastically reducing the onerous population. In their 2016 spring pike index netting survey (SPIN) effort last month, the KNRD along with the Washington Department of Fish and Wildlife (WDFW) set 420 gillnets and caught 182 northern pike.

“We’ve really cropped the population down,” said KNRD fisheries biologist and project lead Nick Bean. “We knew this was going to be a long term commitment . . . we have really good pike habitat here but the results indicate clearly that the program is working.”

“Success for us was to get below those targets and maintain that population below,” said Bean. “We’re far below those targets and we’re at the point now where we can scale back the program if necessary. As an example, we scaled it back by about half this year, so we only set 420 gillnets over a five week period, it’s normally about 1,000 gillnets over a 10 week period.”

While the pike problem seems to be abating in the free-flowing section of the Columbia River between Trail and Castlegar and the PdO, biologists are concerned pike may be getting a foothold downstream in Roosevelt Lake. A six-day gillnetting survey in February yielded 71 northern pike near Kettle Falls, compared to 21 last year.

“That’s not many fish,”Brent Nichols, the Spokane Tribe’s Lake Roosevelt fisheries program director, told Rich Landers of the Spokesman-Review. “What’s troubling is the two distinct age classes we found: 11 fish were one year old and 10 fish were two years old indicating that they could be starting to establish a potential breeding population.”

Undoubtedly, northern pike recruitment will be more difficult to monitor in the massive 150-mile long Roosevelt Lake Reservoir and the recent release of 600,000 nine-inch triploid rainbow trout could provide ample food source for potential pike populations. But the real concern is the spread of northern pike beyond the Grand Coulee and Chief Joseph dams, where access to the mid-Columbia’s pike-friendly waters could prove detrimental to native salmon and steelhead runs.

But for Bean the most crucial aspect is to stop them at their source.

“We are not going to remove these fish from the environment completely,” added Bean. “We’ve got a connected system that’s huge, we’re talking about the whole Pend d’Oreille and Columbia system. Our intentions are here now is to basically put up a wall in Box Canyon and ensure that we’re doing everything we can to make sure these fish are not impacting our local resources and those downstream on the Columbia when we’re dealing with ESA (endangered species) listed salmon and steelhead.”

Next month, Columbia Basin Trust will bring together groups from Thompson Rivers University, Teck, BC Hydro, Okanagan Nation Alliance, MWR and MFLNRO for discussions on northern pike management in the Columbia River.