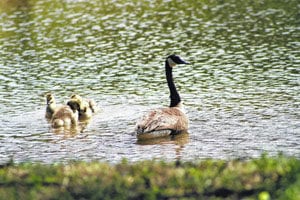 PICKENS COUNTY — It’s hard to believe that at one time, the Canadian Geese — branta canadensis — was nearly driven extinct.

Strict hunting regulations along with population conservation and re-introduction protocols have successfully brought the birds back from the edge, but with an unintended consequence: now they won’t leave.

Although traditionally migratory birds, a substantial number of Canada Geese have been making South Carolina their permanent homes.

According to the S.C. Department of Natural Resources, migratory geese numbers are declining as more and more residential birds set up shop and lay claim to prime nesting ground locations.

In a paper on resident Canada Goose populations put forth by Clemson University and Carolina Clear, it was suggested that the sheer number of the birds would become problematic within the decade and stated that geese populations can double their size every five years.

Much like salmon swimming upstream, the strong honing instinct of the birds drives them to return to their birthplace every year to nest and raise their goslings — in clutches that can range from as little as two to as many as eight hatchlings.

Although the geese only breed once a year, their longevity also helps to bolster the bird’s numbers. Geese in the wild have been known to live for 30 years.

Because Canada Geese are one of the few species of birds that can digest grass, they can thrive in urban areas other species avoid such as backyards, golf courses and even airports.

The Federal Aviation Administration recently estimated that in the United States there are roughly 240 aircraft collisions with the geese every year. In fact, it was a flock of Canada Geese that caused Capt. “Sully” Sullenberger to have to save U.S. Airways flight 1549 by landing the plane in the Hudson River in 2009.

Biologists state that if homeowners are not fond of the birds, there are methods that can discourage the geese from hanging around. Plastic netting on lawns, reducing the amount of lawn and addling (shaking) or oiling the goose eggs are popular deterrents. Various sprays and powders are also available for purchase that make the grass taste bad to the geese, but don’t actually harm the birds.