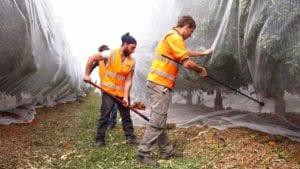 As far as he is aware, the farm has become the only netted citrus orchard in the Riverland region.

This will be their first season of fruit from under the nets and earlier indicators are showing several benefits.

“Our main reason for the protective netting was to try and improve our class one pack-out,” Ryan said.

“Wind blemish is a major issue on our property so just to reduce the wind speed through our orchard is our main reason.”

Ryan has placed protective netting over 16ha of actual orchard on the 101ha property which also produces wine grapes.

Early season Navel oranges are on track to start being picked later this month or early May.

The benefit of the slight shading is also being considered.

“It also allows us to keep bees out of our Afourer mandarin patch so we can try and keep them seedless,” Ryan said.

There are two trial weather stations on the property- one inside the netted area and one in the conventional orchard- measuring climate elements such as temperature, humidity and rainfall.

Figures show reduced moisture loss of about 30pc inside the nets.

“Effectively we should have better water efficiency under the nets,” Ryan said.

“At the moment we are probably applying similar amounts of water to outside the nets but our crops are a lot higher.”

He said an improvement in field efficiency may mean the difference between trees carrying a 60-70 tonne crop as opposed to a 40 tonne crop.

“We’ve got some really good data we can compare side by side to see what effect the nets are having and we can relate that back to yield,” Ryan said.

Though less of a concern, the nets also provide a line of defence against hail damage.

But any form of protection gives a bit more peace of mind.

“We still find anything less than first class fruit hard to move at a profitable price,” Ryan said.

“Before nets, we were having pack-outs of around 20pc and we were struggling to be profitable.

“Our mandarins are a shining light and our lemons have been really good for us to.”

Pyap Produce has an export focus for its citrus, sending mainly oranges to China and Japan.

“That’s where we make our best returns on,” Ryan said.

“Once we get past class-two or class-three it’s a loss, and there is no juice price for us in our region anymore so it’s just a loss of money growing anything that’s not packable.”

“We are also aware that the terms of trade at the moment are pretty good,” he said.

“The markets into Japan are probably alright and there is probably a little opportunity into the USA again this year.

“So we are aiming to satisfy all those markets as much as we can, and any growth into China helps take fruit out of some of those other markets and it helps create demand for our product which helps the bottom line everywhere.”

Pyap Produce has done its research when it comes to target audiences.

“So they see stuff grown in Australia as a safe product to have so they can feed it to their families and have the confidence that it’s going to be good and healthy for them.

“I think what’s a testament to our industry, and agriculture in general in Australia, is our QA.

“Our growing methods are right up there, we keep records meticulously and our traceability is good, so we can give them the confidence with all that information and data that they are getting a safe product.”

Ryan describes the Riverland region as an area which can produce some of the best Navel oranges in the world.

The already promising results from the protective netting have prompted Pyap Produce to consider further investment in the citrus industry.

The decision to invest in the protective netting was helped by a South Australian Government grant scheme where farmers could sell water at a leveraged price in order to offset costs of infrastructure improvements.

Ryan estimates that without the grant the protective netting investment would have about a seven year payback, however due to the assistance, it could be a two to four year payback.

“I can definitely see us protective netting high value crops in the future if it proves the payoff here,” Ryan said.

“It’s quite exciting where the industry sits at the moment.”

The protective netting is guaranteed for 10 years but Ryan hopes to get 15 out of it. The structure should be there for 30 years or more.

While the nets help with fruit growth, they don’t necessarily have an impact on the property’s biggest cost: labour.

“Sometimes I think it would be nice to have a little bit more price for our produce at the end to factor that in,” Ryan said.

“It’s a hard job picking fruit and pruning so we need to pay good wages.”