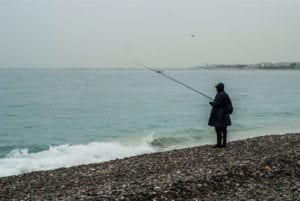 Scores of registered fishermen protested on Tuesday outside the office of the Deputy Commissioner Bandipora against what they said illegal netting rampant in Wular Lake.

The protestors alleged that Fisheries department officers in Bandipora were allowing illegal netting while taking commission from few chosen people who were not even registered as fishermen in the department.

They said that Illegal netting in Wular lake was posing a serious threat to fish resources in this breeding season.

“Ilegal netting by some outsiders who are hand in glove with fisheries officials is posing threat to livelihood of thousands of registered fishermen in the area,” alleged Abdul Karim Dar.

He also said that due to illegal netting also destroys fish seed in the current breeding season.

The protestors said that they had raised this issue before Deputy Commissioner and fisheries officials but nothing concrete happened on ground.

The protestors raised slogans against the Deputy Commissioner and fisheries officials alleging they were hand in glove with these illegal encroachers.