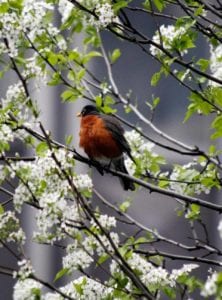 Have you ever spotted a big, red, ripe strawberry, reached to pick it, and found something else had already taken a bite out of it? I have and more than once.

My grandfather was a Swedish immigrant and a farmer. Actually, Grandpa worked at anything that would provide for his family. He had several acres planted in strawberries. Dad followed in his footsteps, but he and Mom settled for less than an acre — but not much. I earned money for school clothes and grain for my horse by picking strawberries. Of course, I sampled as I picked. It was maddening when a particularly beautiful berry had been bitten by a robin. They could spot the best ones quicker than I could — and the bite was always on the bottom, or so it seemed.

Robins got the blame for the strawberry tastings, but I’m sure the towhees must have fed some to their youngsters too.

Robins get the blame for other irritating habits even if they aren’t the only culprits. Attacking windows during nesting season is one of their more famous faults. Flying into windows and sometimes killing themselves is another robin problem. In addition to the strawberry raids, these handsome rogues also like cherries, plums and other berries. That’s what led to the manufacture of something that can help with several bird-related problems.

Bird netting was designed to cover the rows of berries and foil the robins’ attempts to sample. It can be used for more than strawberries. Raspberries, boysenberries and if the fruit trees aren’t enormous giants, this netting can also protect apples, pears and plums. I wish I could net my ancient Royal Anne cherry tree, but it’s just too big. Protecting fruit crops may be the number one advertisement enticement, but how about window protection?

Years and years ago, a neighbor and an early reader of this column told me how she was protecting her birds from her large picture windows. She had found a way to stop or greatly reduce the number of birds killed by flying into her windows. She hung one of her husband’s old fishing nets in front of them. The net was attached to the wood siding above the windows. It was so fine that it didn’t obstruct her view but it broke up the reflection that was drawing the birds toward the windows. It was a great idea, but most of us don’t have this type of fishnet handy.

The bird netting designed to cover fruit crops would also work and again, it was tried and proved by another reader.

Even better than the fish net is the color of bird netting. It is black and very, very fine. This makes it less obtrusive when it comes to not obstructing the view out the windows. It also breaks up the reflection, and this is the most important when it comes to attacking territorial birds.

Finally, how about bird netting for birds such as the woodpeckers and starlings who want to drill under the eaves or other parts of the house? If netting was hung under the eaves down to a length of about 2-3 feet, it could discourage these birds from trying to move in. Because this netting is so fine, small weights might be needed on the bottom edge as a way to keep it hanging straight down instead of wafting in the breeze. If there are those who have tried this, I would love some input. Bird netting may have been designed for protecting fruit crops, but it’s worth having around for other projects too.