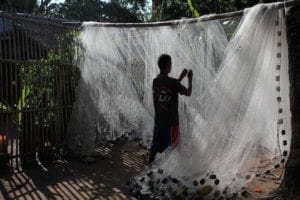 MANILA • Approach Guindacpan island in the Philippines by boat, and it looks like yet another tropical paradise. Closer to shore, however, the idyllic scene is decidedly tarnished. Instead of sand, the beach consists of stratified layers of modern human consumption: plastic bottles, the idle litter of residents, and miles of torn, crumpled, discarded nylon fishing nets.

“We used to just throw the nets out,” admitted Ms Ruth Torreon, a Guindacpan native.

According to the United Nations Environment Programme, fishing gear has been discarded in the earth’s seas and oceans ever since humans began fishing. The problem has worsened significantly in the last 50 years.

Ms Torreon is on the beach with about two dozen other women, chattering as they tug at muddy old nets, collecting them into a pile. On their days off, the fishermen bring up any discarded nets they find on the sea floor.

The collected nets are cleaned, then sold by the kilo to a business called Net-Works, launched in the Philippines in 2012 by the Zoological Society of London, a conservation group, and Interface, a multinational manufacturer of carpet tiles.

Net-Works ships the nets to Slovenia, where another company recycles and spins them into nylon thread. Then Interface weaves the threads into modular carpet tiles, selling them to corporate clients.

The success of the programme is measured not in the quantity of nets they pull from the ocean but in the improved livelihoods of the people they work with.

Net-Works also organises savings clubs for each collection facility, pooling a portion of the money earned and lending it to members.

“This is not a charity,” said Interface vice-president and chief innovation officer Nigel Stansfield.

“We’ve done Net-Works in a way where it is not dependent on philanthropy… It’s about setting up a business that’s inclusive and transparent, but nonetheless is a business.”