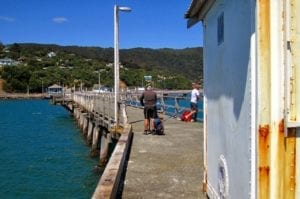 SANTA CRUZ, Calif. —Over the last five years, Cowell Beach in Santa Cruz has earned the unhappy distinction of having California’s dirtiest ocean water, but hopefully not for long when they install pigeon netting.

Pigeons roosting under the Santa Cruz Wharf were determined to be a major source of the high bacteria levels.

City crews are taking action this week to keep the fowl from fouling ocean waters.

Cowell Beach’s dirty water confounded the city for years, and the city’s Cowell Working Group conducted several studies to find a source causing high bacteria levels that made the area unsafe for swimming.

“We’re using it to barricade out nesting areas for pigeons down in the transition zone, the tidal area on Cowell Beach,” Bombaci said.

“There may be other natural occurring things that we probably won’t be able to control, so we’re looking at the controllable sources, and this is one of the most obvious,” said Scott Collins, assistant to the city manager.

“The summer is when most people are on the beach. So our goal is to goal is to get all the infrastructural needs met, all the barriers installed, before summer,” said Nik Strong-Cvetich, executive director of Save the Waters Coalition.

The cost for fencing underneath the wharf was $50,000.

Ocean water quality will be tested regularly at Cowell Beach to determine if the anti-bird efforts are making a difference.