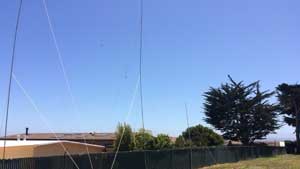 Residents in Pacific Grove are not happy about a new net planned for the golf course, saying it will block their view of the bay.

The city doesn’t have much of a choice — a court order is forcing them to install the netting.

The planned net would be more than 30 feet high and 320 feet long. But nearby neighbors hope the city will at least consider putting a smaller net in.

“They claim that netting is 35 feet is a standard. That’s baloney. It’s not a standard,” Sanford Cohen said.

“See the top of those poles? I can’t even see the mountains over there,” said Stillwell, pointing across the bay.

When the netting first goes up, it will be see-through but neighbors are concerned that eventually it will look like other netting on golf courses, overgrown with moss and lichen.

“It is see-through when it is brand new but not later. That’s why I am getting mad with all of this business,” Stillwell said.

The plaintiffs in the case live in Monarch Pines, which borders the golf course. They say the trees were a danger but now that they are gone, errant golf balls are also a concern.

Cohen and Stillwell said they understand neighbors in the Monterey Pines Community need to be protected from golf balls. They’re still hoping for a shorter net.

“You have to balance their safety, which we regard very highly, with the views that people get of the bay,” Cohen said.

A Public Works official said the issue is in the hands of the City Council.