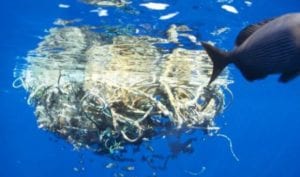 The worldwide production of plastics has increased considerably since the middle of the 20th century.

Garbage patches
It appears that all sorts of plastic debris have been accumulating for years within the North Pacific and South Atlantic Gyres in the so called ‘garbage patches’. This process has been studied by scientists trying to assess both the geographical distribution and magnitude of such patches, and their composition.

Redundant sections of synthetic netting – whether made of lighter-than-water polyethylene or polypropylene, or of heavier materials such as nylon but still attached to floats that keep them floating at the surface or in midwater – represent a major menace to marine animals. This is especially true with regards to the air-breathing ones, such as turtles, dolphins and birds which, if they become entangled in trash netting, or caught on the hooks of lost longlines, eventually die by drowning.

Certain sorts of marine garbage can attract marine birds and other marine animals for their resemblance to food. For example, turtles may mistake floating plastic bags for jellyfish – their regular food – and choke on them. Others, while they also may choke on pieces of softer plastics, such as plastic bags, swallowing harder objects may even cause them internal wounds. Abandoned netting sections that sink to the bottom become a deadly trap to groundfish.

Pieces of plastic debris are found across the whole range of aquatic animals, especially in freshwater, estuarine or marine fish guts, and in the skin of both farmed and wild fish. Fish can serve as indicators of the effects associated with the presence of plastic garbage in their habitat.

Usually, marine plastic trash consists of large artefacts or fragments of objects such as plastic bags, furniture items, boxes and other sorts of packing and wrapping materials. Others may be the beads from a facial scrub, synthetic fibres shed in the wash, or eroded larger debris. It appears that discarded plastic objects of whatever size are causing more damage to marine life than other materials. This is because large plastic objects eventually disintegrate into tiny pieces of plastic of few millimetres or less – so called ‘microplastics’ – whose further degradation is extremely slow, hence they persist for very long time in the marine environment.

Report
In a report published online, Dr Chelsea M. Rochman and others describe such tiny bits of plastic debris and textile fibres found in fish and shellfish. Dr Rochman, an ecologist at the University of California, is a member of a working group which studies, among other things, the developing quandary of ocean trash. While several studies have sounded anxiety about the dispersed marine debris and its accumulations in certain areas, Rochman and co-authors are trying to determine how many of those perceived risks are real. In a paper, entitled The ecological impacts of marine debris: unraveling the demonstrated evidence from what is perceived, published in February in the journal Ecology, Rochman says that nobody had yet tested those perceived threats…“There wasn’t a lot of information.”

Rochman and her colleagues examined more than a hundred papers on the impacts of marine debris that were published through 2013. Within each paper, they asked what threats scientists had studied – 366 perceived threats in all – and what they’d actually found.

In 83% of cases, the perceived dangers of ocean trash were proven true. In most of the remaining cases, the studies were too inadequate to draw conclusions from – they lacked a control group, for example, or used faulty statistics.

According to Rochman, microplastic ingested by mussels moved from their stomachs to their bloodstreams and stayed there for weeks, but didn’t seem to stress out the shellfish.

Ocean debris is bothersome in many ways, most of the proven threats coming from plastic rather than other materials like metal or wood. But compared to the number of studies investigating large-scale debris, Rochman’s group found little research on the effects of microplastic. “There are a lot of open questions still about microplastic,” Rochman says.

The presence and accumulation of microplastics in the ocean is of considerable concern for a variety of reasons, especially because they are ingested by marine biota. Microplastics can absorb persistent bioaccumulative and poisonous compounds from seawater, including persistent pollutants, both organic and metals. Once ingested, the absorbed pollutants may be transferred to other organisms. However, while microplastics have been reported in a wide variety of marine organisms, the extent to which their ingestion might be poisonous is still to be assessed.

Exaggeration
Sometimes scientists tend to exaggerate the hazards. If research finds, for example, that certain seabirds eat plastic bags this is a fact, but if their report warns that whole bird populations are at risk of dying out, it is a speculation.

The ubiquity of trash of human sources in hundreds of species of marine wildlife, including possible poisonous chemicals and their presence in seafood, has been causing much anxiety. The presence of man-produced trash in fish and shellfish on sale for human consumption was studied, through sampling from various world markets, where all fish and shellfish were identified to species wherever possible. Such debris was extracted from fish bowels and whole shellfish, and quantified under a microscope.

Undoubtedly, findings of microplastic debris in marketed fish should raise concerns regarding human health, and should be scientifically investigated.