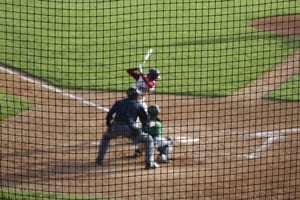 Just about anyone who has ever attended a baseball game has witnessed the following scene: A fan in attendance, usually along the first- or third-baseline, isn’t paying attention to the play on the field. Within milliseconds of the crack of the bat, a fan is struck by the ball and takes the brunt of the force of the live ball, only slowed down by air resistance, thanks to lack of protective netting.

MLB made waves this winter by recommending that protective netting should be installed beyond the dugouts at all 30 MLB ballparks. Several minor league baseball teams have put in additional protective netting as well, including the local Columbus Clippers.

Ohio State Executive Associate Athletic Director Martin Jarmond confirmed that in 2017, protective netting will be expanded at Bill Davis Stadium, extending to the ends of the dugouts on the baselines to protect the most vulnerable fans.

“We are always looking for ways to provide a better and safer experience for our guests,” said Associate Athletic Director Mike Penner.  “The netting is one way to do that.”

Penner told The Lantern that the department has budgeted $50,000 for the project.

Some fans watching the OSU baseball team take on the University of Alabama-Birmingham on May 3 had a general consensus about the eventual extension of netting: For the safety of the fans, it’s a change that needs to happen.

R.C. Perez, a third-year in sport industry, said he recalls a moment earlier this season when a group of kids sitting on the first-base side above the dugout was moved to another side of the stadium where a batted ball, broken bat or anything else thrown from the field couldn’t injure the young fans or anyone else in attendance.

“It’s a great idea (for extra netting) because of the risk to kids and other fans,” Perez said.

Dave and Diane Mosbarger — grandparents of OSU senior pitcher Daulton Mosbarger — sit by themselves along the third-baseline even with the dugout. Diane Mosbarger said that at least one of them has to be paying attention when a left-handed batter is at the plate.

“So many people don’t pay attention too much,” she said. “Ushers are constantly paying attention to foul balls.”

The couple has attended over 30 major league ballparks apiece, and although Dave Mosbarger has a different take than his wife, saying that more netting does take away from the experience a little bit, they both said they are sure they will attend many more games in the future despite the increased area of barrier between them and the field.

John Grubb has been an usher at Bill Davis Stadium for five years, and he said in his five years working on the concourse level, he has seen too many close calls.

“You always have several instances,” Grubb said. “One time, a thrown bat just missed some people in box seats … It’s just a matter of time.”

OSU coach Greg Beals said that most fans now choose to view the game through the limited netting behind the home plate area, so the expanded netting will allow fans to sit comfortably anywhere they choose to sit in the ballpark.

“I see the purpose in it, to protect the fans,” the coach said. “The fans are so critical in the major league game, and obviously to us as well, so it makes sense from that standpoint.”

Beals said hanging the net with suspension cables is important to the process because it eliminated poles that can obstruct the view of fans.

“I think once fans get used to the net, you don’t really notice it a lot,” he said.

The installation process is expected to take four months.