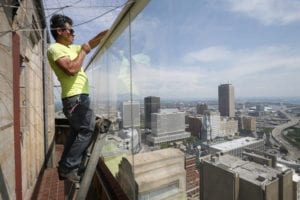 People touring the outdoor observation deck on the 28th floor of Buffalo City Hall this week were in for a surprise in the form of new safety nets.

The popular tourist spot, about 378 feet above the city, was reopened Wednesday after being closed to the public earlier in the week for the work. Workers from Nets Unlimited, a national business that supplies netting, installed what appeared to be overlapping wire netting above the 10-foot Plexiglass barrier that rings the observation deck. The job was supposed to take until June 28 but went more quickly than expected.

City spokesman Michael J. DeGeorge wouldn’t comment on what led to the installation of the netting.

The last high-profile incident at the observation deck occurred May 2014, when a man in his mid-20s leapt off the building to his death. In that instance, he scaled the Plexiglass wall in order to commit suicide.

The netting appears designed to prevent such an attempt.