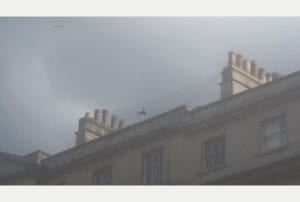 A seagull that became stuck in netting on the roof of a Bath building has an eagle-eyed person and firefighters to thank for saving it.

The bird was spotted entangled and on top of a building in the city on Friday (June 17).

After being alerted to the incident, Avon Fire and Rescue Service sent its pluckiest firefighters to climb up a turntable ladder and reach the seagull before freeing it.

A spokeswoman for the fire service said: “We were called out at 16.09pm on Friday to reports of a seagull that was caught in netting on the roof of a building in Bath.

“Crews used a turntable ladder and released the seagull. It was then handed over to a local vet.”