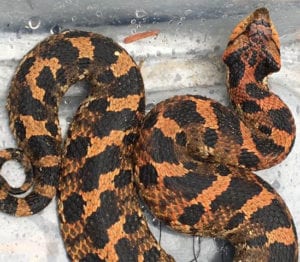 One lucky hog-nosed snake is roaming free at the North End of Virginia Beach, thanks to Laura Horan, after it was trapped in landscape netting.

Horan put a photo on Facebook recently of the snake totally entwined and trapped in green sod netting in a neighbor’s back yard.

“Can anyone tell me (quickly) if a hog nose snake will bite me if I try to cut the netting off his neck,” she asked her Facebook friends.

Many comments came back saying that a hog-nosed snake was docile and preferred to roll over and play dead than confront a foe.

But with its bright orange and black colors, and its strange up-turned, hog-like nose, the snake does look a bit ferocious.

The snake also hissed and flattened out its head like a cobra, Horan said.

It’s easy to understand why she was leery.

So she checked out the hog-nosed snake further.  Everything she read on Google also confirmed that it was a docile, harmless critter.

Horan decided to rescue the snake before it died, snarled in the mesh.

Landscape and erosion netting are really harmful to wildlife.  It will easily trap unsuspecting animals that walk over it, crawl under it or fly into it.

Horan went to work with scissors and was able to cut the snake free, but, she said, it wriggled and wriggled as she worked on the netting and only once the snake was free, did it roll over and play dead!

Soon however the beautiful snake came to and slithered away heading for the green grass beyond Horan’s deck.

“I came in out of the rain with a warm fuzzy feeling for being able to help out another beautiful creature,” Horan said.

All snakes should be so lucky.