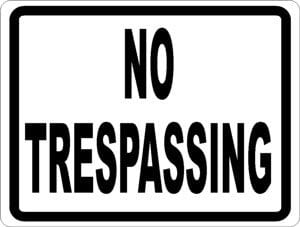 The “No Trespassing” signs on the unfinished stretch of the Riverwalk north of the David A. Straz Jr. Center for the Performing Arts could hardly be any clearer.

And then there’s the red and white striped traffic barricades and plastic orange netting, all intended to keep construction site and public apart.

But the lure of the pristine new sidewalk that runs along the east bank of the Hillsborough River as far as Water Works Park has been seemingly impossible to resist for dozens of joggers, walkers and bicyclists, thereby creating a headache for city officials.

“It’s the last piece that connects me to downtown,” said Nick Diorio, who rode past construction workers along the unfinished Riverwalk on his mountain bike Tuesday. “You’re excited to get off the street and ride a little bit protected from the cars.”

This outbreak of recreational anarchy seems likely to continue through to mid June. That’s because of a delay in the completion of the $5 million project that was tentatively slated to be finished last month. Construction has been hampered by rain and also by a fire at the warehouse of the company building the metal screens that will eventually hold the artwork to be placed under the Laurel Street Bridge, said Brad Baird, the city’s public works and utility services administrator.

The rains made it difficult to install concrete piles, Baird said, that act as a cantilever to the Laurel Street Bridge section. Keeping people out of the construction zone has been difficult, he added, but has not added to the delay.

The city did open the new Riverwalk stretch for the two-day RiverFest at the end of April but now wants residents to remain out of the construction site until it is officially opened. The “No trespassing” signs warn that entering a designated construction site is a felony.

While the main stretches of the sidewalk are laid, workers from Associated Builders and Contractors are still laying pavers in ornamental areas and using machinery to lift and plant trees close to Laurel Street.

“Where there is stuff overhead,” Baird said, “we don’t want citizens walking past without hard hats.”

Last weekend, when no construction workers were on site, bicyclists and runners took advantage of a gap where the plastic netting lay flattened on the ground to hit the trail.

Bert Owens, a retired military officer who was walking through Water Works Park with his wife Pamela Owens on Tuesday, said he has seen dozens of people using that stretch of the Riverwalk.

He fears someone will get hurt and end up suing the city or the construction firm.

City leaders have hailed the Riverwalk as a critical part of the rejuvenation of downtown Tampa. With the addition of this final section, people will be able to walk, ride or run for 2.4 miles from Water Works Park to the Tampa Bay History Center.

Former Major League Baseball player and Hillsborough High School standout Keith “Kiki” Jones jogged alongside the Riverwalk Tuesday but kept to the sidewalk rather than run in the construction zone.

The former Los Angeles Dodgers pitcher said he can’t wait for it to open so he can run closer to the river. “It’s serene,” he said. “It brings people peace.”