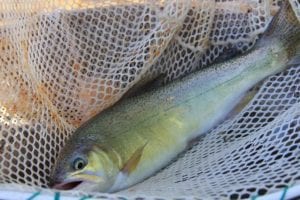 Anyone who has doubts about the illegality of taking trout from Otago Harbour will have them dispelled as the result of a prosecution in the City Police Court yesterday morning regarding netting.

Three men were charged with netting for trout during the close season. Mr W. L. Moore appeared for the defendants, who pleaded not guilty. Mr D. Cooke, who prosecuted, said that the men lived practically at the water’s edge, and should have known that they were doing wrong.

The defendants had no license, and even if they had had one it would have made no difference in the close season. It was true that the men had a haul of flounders. There were nine sea trout, six of them female, which meant the taking away of some 40,000 eggs.

Mr Moore said that the men were fishing largely for pleasure, and divided the take between them. They were netting for flounders, and had got some seven dozen, with which they openly put a few trout. Counsel could say that it was not generally known that trout caught in the harbour must be put back.

The magistrate (Mr J. R. Bartholomew) said that he thought the minimum penalty would meet the case. A maximum fine of £50 was provided. Two of the men were each fined 40s, with costs amounting to 20s, and the third was fined a similar amount, with costs and expenses totalling 41s, besides being order to forfeit his net and gear.

Mr H. Y Widdowson, S. M., presided over a short sitting of the Juvenile Court yesterday, when a girl between the age of 15 and 16 years, who was arrested early in the forenoon, was charged with having, on March 28, at the Dunedin Railway Station, stolen a purse and contents, valued at £3 3s 7d, the property of Helen Sparks.

Chief-detective Bishop asked for a remand to a date to suit the convenience of the court. He pointed out that the complainant was a resident of Mosgiel, and on the date in question she came into town.

While waiting at the station to return home she was talking to a lady friend in the waiting room, the accused being the only other occupant of the room.

The complainant and her friend went out for a moment, the former leaving her handbag and purse, which contained her return ticket and money. When she returned the bag and contents were gone, and the accused had disappeared.

The police had been making inquiries concerning her, but had not been able to get any address, and she had just been arrested that morning. She was a neglected child, her father being a drunkard, and she was in the habit or roaming about at will.

The police had reason to believe that she was living an immoral life. The reason why the remand was needed was that the father might be produced in court, and the magistrate would be able to see what kind of man he was.

In reply to the magistrate, the girl said she had no objection to the remand.

She was guilty of the offence. The remand was granted until Tuesday, and in the meantime the girl was handed over to the care of the Salvation Army authorities at Caversham.

Before the war briar pipes were imported from France in enormous quantities, but the French Government has appropriated about eight millions of them for the troops, and the expert workmen who make the pipes are serving their country.

What few are left cannot supply even this home demand. The result is that briar pipes are going up in price to an alarming extent, and some of the best makes show an increase of 25 per cent.

The advice of a big manufacturer to the pipe smoker is: ‘‘Husband your resources, keep your old pipes, and cherish them as old friends which may be valuable again.”