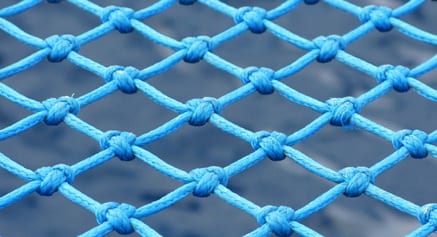 Like so many bright ideas, it´s the one that has been staring us in the face for…well, for ever, almost.

When I first saw a section of netting turned sideways, I thought it was mad. That’ll never catch on, surely? Isn’t the idea of square mesh radical enough?

But think about it. Why have we traditionally configured netting as we do? Probably because that’s the way netting was made back when it was all braided by hand, something that goes back several millennia. Machine-made netting, the netting that’s universally used these days, actually comes off the looms sideways – which is only ‘sideways’ if you work from the starting position of traditional hand-braided netting – the autoclave treatment gives it the familiar orientation.

The smart idea of turning netting past the T45 of square mesh to the full T90 seems to have occurred in more than one place at roughly the same time. T90 was being tested in Poland at the end of the 90s as a way to improve selectivity and catch quality, while researchers in Denmark were also working on T90 to examine potential advantages.

The advantages are that netting in a T90 configuration opens more effectively, improving water flow and also making significant improvements to selectivity in some fisheries. Today there’s nothing unusual about T90 codends capable of holding many hundred tonnes, as well as T90 netting used in many smaller gears. It’s also supposed to be marginally stronger, as the way the bars lie is closer to the direction in which the netting is originally produced, while square mesh netting loses a great deal of strength as the tension lies through only half of the bars.

There’s the option of using T90 solely in the codends of a trawl or a seine net – or there’s the initially daunting task of making an entire set of gear with the netting turned through 90°. It’s a headache for a netmaker to begin with, like learning to drive on the wrong side of the road, as the practicalities of rigging the gear have to be figured out. It’s also a headache for the crew who have to repair and maintain gear in this unfamiliar configuration.

The advantages appear to outweigh the disadvantages, not least in selectivity, although gears made in T90 throughout are still a rarity. It hasn’t been entirely painless, and it has been a process of learning and experimentation, but there is no doubt that T90 brings benefits and it has become a key element in the fishing gear design toolbox.

The question is what comes next – what other smart ideas are there with the potential to make things easier and fishing more efficient? You can be fairly sure that it’ll be something that has been staring us in the face, waiting for someone to ask why it has never been done.